A Different Approach to Getting Things Done 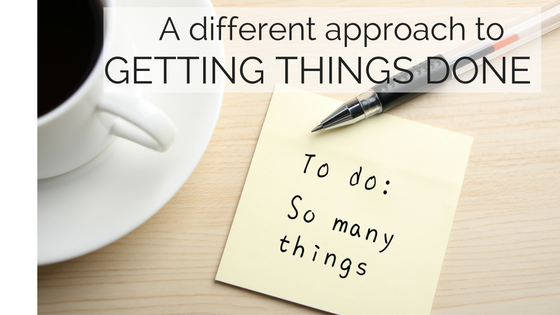 Most of us feel overwhelmed by the many important, but not always urgent, tasks and projects that we need/want/have to or should do. We’re frustrated and stressed by our failure to get it all done.

What gets in the way? It isn’t necessarily a lack of motivation that’s holding us back, but the challenges that come from a lack of time and/or clarity:

So, How DO We Get Anything Done?
Many people, especially those with ADHD, are ‘burst workers.’  It takes us so long to activate, that when we finally get going on something, we want to get all of the mileage we can. So we wait until the last minute then shift into hyperfocus mode, then get so caught up in what we’re doing that it’s hard to stop. It helps when there’s a deadline, as there are no longer conflicting priorities, and the adrenaline (think stimulant) is naturally flowing, helping with concentration.

But what if there isn’t a deadline? What if it is a project that’s important, but not urgent?

Start by Making the Project Do-Able… and Avoid Overwhelm
Projects can be complicated, and often involve many steps that can take a lot of time to complete. Just thinking about a project (instead of an individual task) can lead to feeling overwhelmed. Our protective brain perceives overwhelm as a threat, triggering the ‘fight, flight or freeze’ response. So instead of the increased clarity and focus we need to get things accomplished, we’re more likely to escape into avoidance mode.

The only way a project becomes do-able is when it’s broken down into tasks (individual components). Tasks allow you to focus on doing just one thing at a time. Yet sometimes, accomplishing even a single task can be challenging.

Think about it:  How do you eat an elephant? Bite-by-bite. How does Pac-Man win? Byte-by-byte. How do you tackle a project, bit by bit, step-by-step or task-by-task!

Enter the Tortoise Approach… Slow and Steady Wins the Race
How to Overcome Avoidance, and Cross the Finish Line (Get it Done!)
Start by choosing one very specific task (or mini-project) that will help you accomplish your project or long-term goal.

You can put the task on your calendar as a Task-Appointment (an appointment with yourself to accomplish a specific task at a specific time).

But putting it on the calendar doesn’t mean you’ll get it done.

We’re most likely to complete things when there’s a looming deadline with consequences, when it’s a task we really enjoy, or if we’re trying to avoid something that’s even less appealing! Otherwise, so many things can get in the way, and we wind up with a large number of important tasks that we never seem to get around to completing.

So make the task more do-able by making it even smaller:

The smaller the task, the more likely you’ll be to do it – especially if you’ve assigned a time to work on it.

Slow down and limit the amount of time you work on the task (so you’re more willing to do it!)

Shoot for the minimum time and set a timer to keep you honest! If you’re on a roll and want to work longer, it’s okay to keep the momentum going if there’s nothing else you have scheduled.  If you are still having a hard time getting started on the task, use a timer that shows the remaining minutes disappearing – so the end is actually in sight! 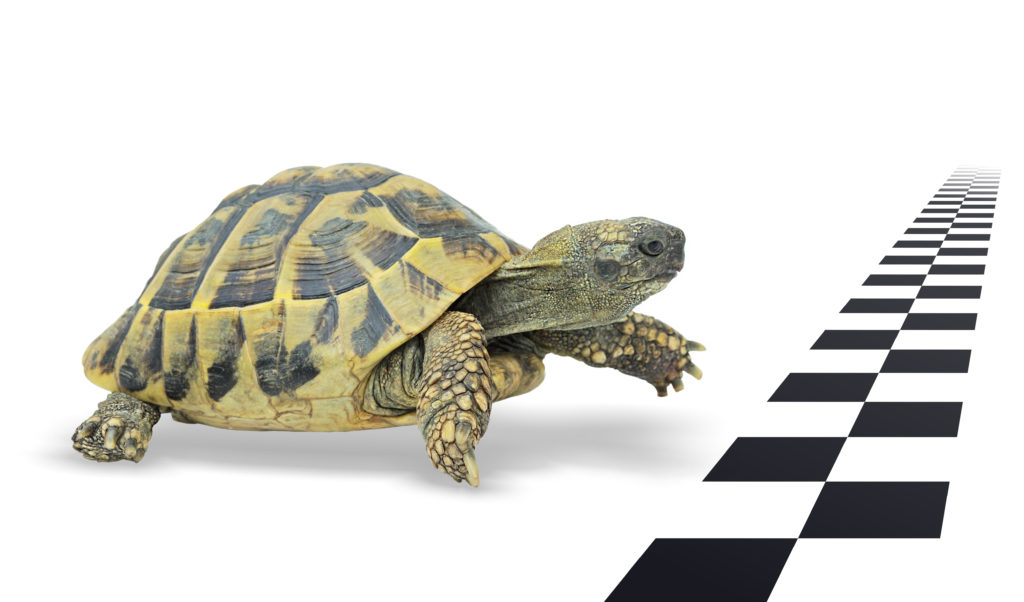 Like the tortoise, keep plodding onward.
Studies show that authors complete more books when they write for ten minutes a day than when they wait for the time and inspiration to do burst-writing sessions.
Commit to working on your task, or other parts of the project, on a regular basis (every day, four times a week, or whatever makes sense for you).

Even if you absolutely don’t feel like it, or you’ve been swamped by other, more pressing tasks, by carving out these short but regular sessions to work on tasks related to that important, but neglected project, you will get it done!

Often it helps to have other people to encourage your efforts and hold you accountable. My new program, Your Online Action Group, does just that, with the TUIT Project (so you’ll finally get around to it!). It’s inexpensive and super supportive. Everything is online or recorded, so no problem if you miss something. Check it out at www.OvercomeOverwhelm.com.
For individual coaching or group training, go to www.SusanLasky.com or contact me at Susan@SusanLasky.com. 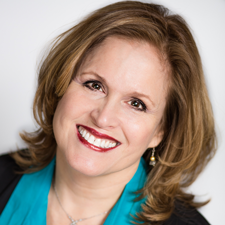 Susan Lasky helps people who are overworked, overwhelmed or disorganized to get things done by working with the way they think. For more than 25 years she’s helped them find the right tools and strategies to better manage their time, priorities, paperwork, projects, space and stuff, so they gain more time, energy and focus to grow their business, succeed in school or the workplace, balance work/home/self-care and truly live a life they love!