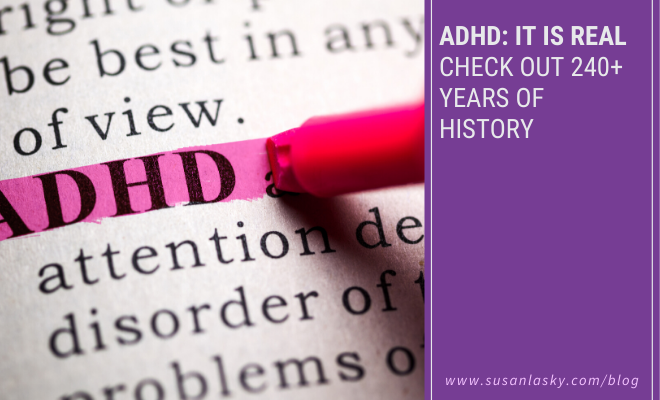 How ADD/ADHD Diagnostic Terminology (and Thinking) Has Changed

ADHD is NOT a new or made-up disorder, contrary to what the skeptics have been saying for the 25+ years that I’ve been an ADD coach, diagnosed ADDult and parent of a now-grown child with ADHD. So respond to the critics by showing them more than 240 years of ADHD history!

Let’s start with some clarity: ADHD refers to Attention-Deficit/ Hyperactivity Disorder. There are three primary subtypes, or presentations – Primarily Inattentive (often referred to as ADD), Primarily Hyperactive-Impulsive and Combined type. An individual can have symptoms that are mild, moderate or severe, and this may change over time or depending on the situation.

Current figures vary, but the CDC says that approximately 9-11% of school-aged children have been diagnosed with ADHD. It is estimated that 4-7% of adults have the disorder. While almost everyone experiences some of the symptoms some of the time, an actual diagnosis is based on several factors. For more on this see the CHADD Fact Sheet. For a free adult screener, go to www.SusanLasky.com/resources/ and scroll down to Free Evaluations & Screeners.

With so much attention on ADHD, there are those who say it doesn’t exist. So here is some historic perspective that will put to rest any thoughts that ADD/ADHD is a NEW or MADE-UP Disorder. (You may not like everything you read, but ADHD can be debilitating!)

“He studies his matters only superficially; his judgments are erroneous and he misconceives the worth of things because he does not spend enough time and patience to search a matter individually or by the piece with the adequate accuracy. Such people only hear half of everything; they memorize or inform only half of it or do it in a messy manner. According to a proverb, they generally know a little bit of all and nothing of the whole… They are mostly reckless, often copious considering imprudent projects, but they are also most inconstant in execution.”

BEST OF ALL: Dr. Adam’s treatment recommendations from over 240 years ago included massage and exercise!

Inconsistency is a major problem for people with ADHD – if they can do something sometimes, why not always? Although people with ADHD can be VERY detail oriented and focused, it isn’t always possible – especially when the subject isn’t of particular interest. (One of the main reasons people dispute this diagnosis is that, when interested, children and adults with ADHD can be attentive, to the point of hyperfocus, yet staying focused at other times can be very difficult. This isn’t intentional – it’s brain-based, frustrating and at the heart of this disorder.)

“In this disease of attention, if it can with propriety be called so, every impression seems to agitate the person, and gives him, or her, an unnatural degree of mental restlessness. People walking up and down the room, a slight noise in the same, the moving of a table, the shutting a door suddenly, a slight excess of heat or of cold, too much light, or too little light, all destroy constant attention in such patients, inasmuch as it is easily excited by every impression… they have a particular name for the state of their nerves, which is expressive enough of their feelings. They say they have the fidgets.” (p.272).

Dr. Crichton suggested that these children needed special educational intervention (in 1798!) and noted that it was obvious that they had a problem attending “even how hard they did try.”

“Every public teacher must have observed that there are many to whom the dryness and difficulties of the Latin and Greek grammars are so disgusting that neither the terrors of the rod, nor the indulgence of kind entreaty can cause them to give their attention to them.” (p.278).

I LOVE THIS – discussing the need for educational interventions more than 200 years ago!

“…with marked moral defect, was unable to keep his attention even to a game for more than a very short time, and as might be expected, the failure of attention was very noticeable at school, with the result that in some cases the child was backward in school attainments, although in manner and ordinary conversation he appeared as bright and intelligent as any child could be.

Dr. Still proposed a biological predisposition to this behavioral condition that was probably hereditary in some children and the result of pre- or postnatal injury in others.

“… hyperactive, distractible, irritable, antisocial, destructive, unruly, and unmanageable in school. They frequently disturbed the whole class and were regarded as quarrelsome and impulsive, often leaving the school building during class time without permission.” (Ross and Ross 1976 p.15).

This was called Postencephalitic Behavior Disorder or the Brain-Injured Child Syndrome.

“…distractibility by new and intensive stimuli, inability to concentrate on difficult tasks, refusing to answer questions and appearing not to listen when spoken to directly.”

Noting that symptoms, especially motor restlessness, decline in intensity by age 7, they called it Hyperkinesis of Childhood.

“The most striking change in behavior occurred in the school activities of many of these patients. There appeared a definite ‘drive’ to accomplish as much as possible. Fifteen of the 30 children responded to Benzedrine by becoming distinctly subdued in their emotional responses. Clinically in all cases, this was an improvement from the social viewpoint.”

This was probably the first documented use of stimulants in children with ADHD behaviors. Although an inadvertent side effect of treatment or headaches, Dr Charles Bradley saw noticeable improvement in behavior. 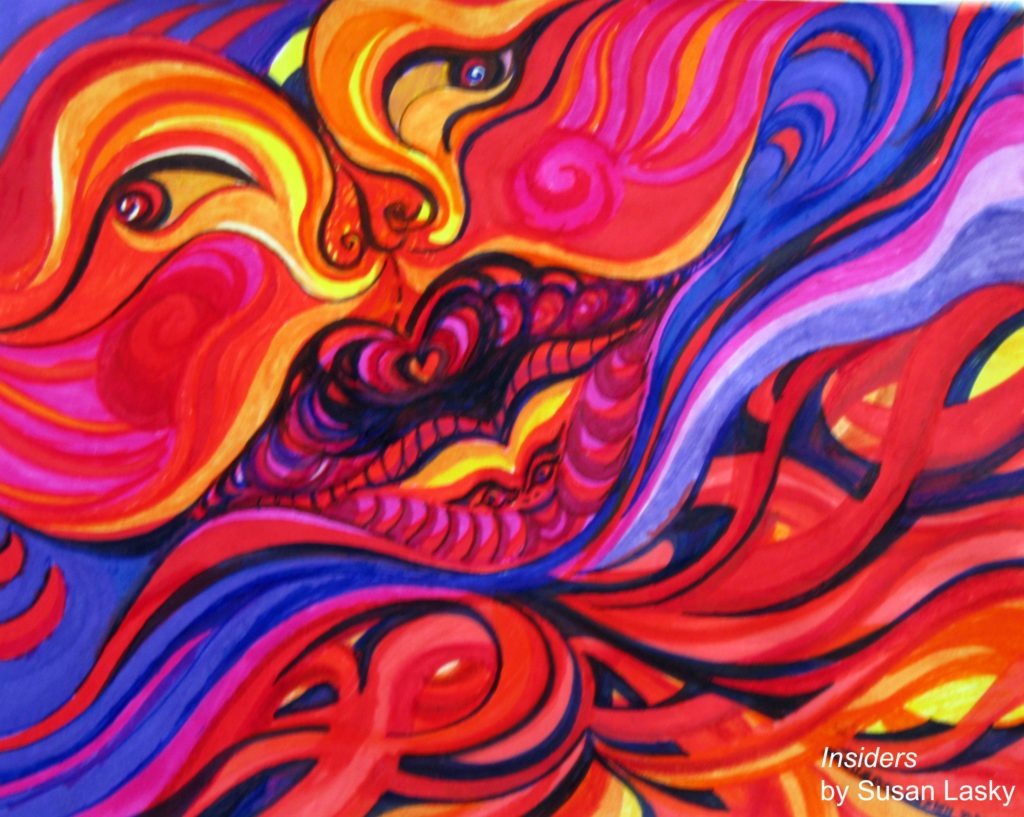 So that’s it… for now.  I still do not like the term ‘Attention Deficit Hyperactivity Disorder.’  I relate more to ones like ‘Attention Surplus Disorder’ (Ned Hallowell) or ‘Information Processing Disorder‘ (I’ve heard this from several people, initially from the psychiatrist William Koch), or even ‘Behavioral Inhibition Disorder’* (I believe Russell Barkley coined this term),

*This theoretical model links inhibition to 4 executive neuropsychological functions: (a) working memory, (b) self-regulation of affect-motivation-arousal, (c) internalization of speech, and (d) reconstitution (behavioral analysis and synthesis). Extended to ADHD, Barkley especially see deficits in behavioral inhibition, working memory, regulation of motivation, and motor control in those with ADHD.

The DSM-listed diagnostic symptoms are not comprehensive by any means. The symptoms now mention organization, which is often a major problem. Still, there isn’t enough awareness of time and energy-related challenges… transitions… time blips… activation/procrastination… completion… hyperfocus (which is why I’ve been writing this for hours and ignoring the other things, like sleep, that are essential)… short term memory issues and future-blindness… and the overwhelming ADD ‘fog’…

I’ve been working with ADHD issues since 1989, and as a Productivity & ADHD coach/ consultant, professional organizer, ADDult and mom of a now-grown son with ADHD, I see patterns, and they differ within the umbrella ‘ADHD diagnosis.’ For instance, I don’t see any diagnostic symptoms having to do with decision-making. Yet, in general, many people with ‘ADD’ tend to be less decisive than someone with ‘ADHD’ (although making the right decision is another story, especially when impulsivity is involved!).

My work with clients primarily focuses on developing compensatory strategies for Executive Function (EF) challenges, which can include planning, prioritization, activation, time and project management, organization, sustaining focus and effort, utilizing working memory, self-awareness and acceptance, etc. There are many people with ADHD who haven’t been diagnosed because they think of ADHD in terms of an 8-year old boy running around in circles and disturbing their classmates – not the quiet daydreamer, the academically hi-achieving Ph.D. or the successful entrepreneur.

So the saga of the ADD / ADHD diagnosis continues to develop. It is clearly NOT a new or ‘made-up’ disorder. The ADHD brain is neuro-atypical and does operate differently. While under certain circumstances this can be beneficial (just check out the vast number of entrepreneurs, inventors, creatives, athletes, politicians, professionals and celebrities who have it), there are definite challenges that negatively affect performance, judgment, relationships and self-esteem.

The more we know about ADHD, its history, impact and treatments, the better the lives of those who have it and those who teach, love, live or work with them.