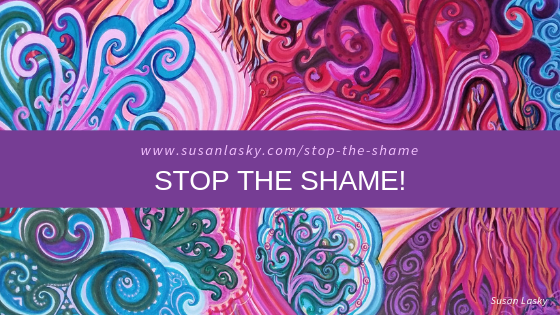 It’s tough enough that many of us have challenges with ADHD/Executive Functions (organization, time management, prioritization, activation, short-term memory, etc.).  But we compound the problems when we add guilt to the mix.

I may not be happy that I’m not checking off all my To-Do’s – even when I’ve realistically created a theoretically do-able Daily Action Plan. Feeling a degree of anxiety about accomplishing things can be helpful as an impetus to action, but dwelling on my failures is totally unproductive – and unfair!

ADHD and EF challenges are neurobiological, which means they exist, like it or not. It isn’t a question of morality, intelligence or willpower. I can find strategies to compensate and even excel, but without them, I will struggle with even simple tasks. And there are days when even my best strategies will go unheeded.

I can write this blog and feel energized, but before I began, I shut my eyes to avoid looking at the kitchen counter that needs straightening, saying ‘later.’ As a productivity/ADHD/organization coach (ah, the irony!), I tell myself to just take 10 minutes on the counter (which would totally be enough time), but my brain cries out that I might lose the train of thought that inspired me to write this. So, the kitchen counter waits.

My brain works in a way that is sometimes quite incredibly wonderful, but won’t usually win awards for straightening up, making calls I’d rather avoid or working on tasks that don’t light up my engagement button. Activation, or getting started on something, has little to do with motivation. I may really want to lower my cable bill, but initiating a call to the cable company to complain meets brain resistance and is easily postponed (it’s important, but not urgent, and has now been on my list for several months!).

I can choose to feel shame and guilt, or I can choose self-acceptance. My challenges aren’t excuses, but they are explanations. I choose to not spend my life focusing on what I don’t do/haven’t done, because that would be a sad way to live. Instead, I look at what I do accomplish (often things that were not on my Action list) and appreciate my efforts. I look at where I’m struggling, and focus on compensatory strategies to help me do better.

Here’s an example: My natural tendency is to be late for just about anything. When I was honest about this, and the negative affects it had on both myself and others (my PowerPlan to Success™ Step #1, Self-Awareness), I accepted responsibility, tempered by knowing I have brain-based challenges that contribute to lateness (Step #2, Self-Acceptance). HOWEVER, I decided I could still improve (Step #3, Belief in Possibility, and that You Always Have a Choice). So, I developed a load of compensatory strategies, both practical and mindset. Now I’m late only occasionally, but if I didn’t use these strategies, I’d be back to old habits.

It’s a waste of energy and a drain on your spirit to mourn the person you are not.  Yesterday morning I spoke with a client, Annie who felt shame when she used a timer to remind her of things. It reminded her that she “was a failure, because I can’t do it myself.” We discussed this, and Annie was able to reframe her thinking from one of failure and self-blame to a positive take. She focused on how terrific it was to proactively compensate for a brain-based challenge that she could not control by willpower alone. She shifted from feeling defeated by her perceived failure to feeling empowered by her decision to let a tool (the timer) create a successful outcome.

That same afternoon I spoke with Paul, who was berating himself for not having done something on a timely basis that resulted in some really negative consequences. We spoke about systems that could make a difference going forward, but the real issue was one of Self-Acceptance. For any system to be effective, it must be used. So he needed to understand and accept that he has executive function deficits that require conscious compensation:

When Paul accepted the reality of how he worked (or didn’t!), he also let go of the shame he had attached to his failure to take timely action. And we came up with some nifty strategies to avoid this in the future.

We always have a choice. We can be the 5-foot tall person who spends her life bemoaning the fact (totally out of her control) that she isn’t 5’10”, or the woman who is 5’10” and wishes she was more petite, or we can focus on our reality and make the most out of it. We can be the person who refuses to wear glasses because he doesn’t think they look good, or we can buy funky glasses that mirror our personality or mood and have fun with it. We can want to lose weight and keep feeling guilty about our lack of willpower, or we can find a program with strategies (not willpower!) that work for us. We can take charge of our efforts, instead of being ruled by inadequacy and self-judgment. Will we always succeed, no. But there’s a lot less stress, and less time wasted wallowing in self-blame and guilt.

Please, stop beating yourself up for struggling. Accept that your wonderful, creative and capable brain has some challenges. Find strategies to help and give yourself credit for workarounds. When things don’t go the way you’d like, refuse to define yourself by your struggles – and don’t let others erode your self-esteem.

If you need help finding alternative strategies, there are terrific books (I’ve listed a few in www.SusanLasky/Resources), and a wealth of good podcasts, webcasts and articles online. Also, consider the benefits of individual coaching to jump-start change – click here to schedule our no-obligation Initial Conversation. If we’ve worked together and you have some new (or recurring) issues, let’s catch up!

Give yourself permission to be imperfect!