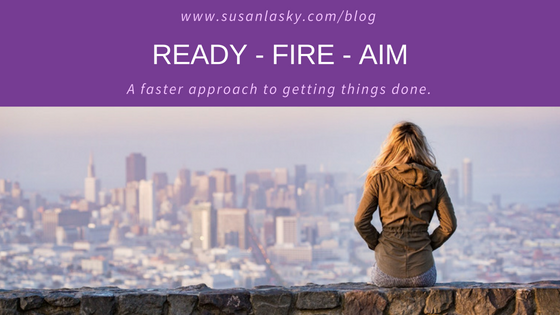 I’m laughing (okay, smiling to myself) as I write this, since it is so much the opposite of what I began to write!

It started with a decision to compile some of my favorite quotes about some of my favorite topics – ADHD, Executive Function, Attitude, Organization, Parenting, Time Management, Relationships, Self-Care, Self-Fulfillment, etc. These well-phrased gems are often perfect for creating perspective on situations with which my clients (and myself) struggle.

I know that some of these ‘words of wisdom’ are originally mine (not surprising when I’ve been writing and speaking on these topics since 1989, when Hal Meyer and I published the first CHADD of NYC Newsletter). However, I know that most are not, and so I went online to seek out sources.

I began with one quote that I know wasn’t my original, although it may have been Hal’s, or more likely Hallowell’s. 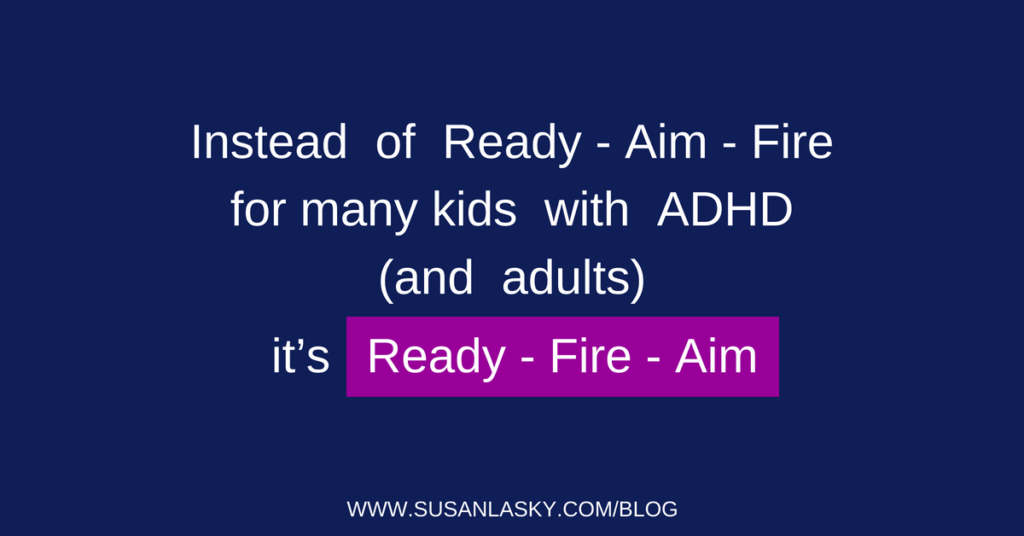 This is a great way to describe the tendency to act without thinking something through. It helps to understand some of the challenges created by the impulsive ADHD mind, and how actions taken without thinking can lead to unexpected, often negative consequences.

I thought I’d write about how important it is to be very clear about your target and goal before taking action (“Ready, Aim, Fire”), so you don’t waste or misdirect your efforts, but when I put “Ready, Fire, Aim” into a search engine, I wound up reframing my thinking about this phrase! Now I think that it can often be a better plan, since it puts the emphasis on action.

Taking action is a major challenge for many people, especially those who are very busy, cautious, or those who might have ADHD, but with a lower dose of the ‘H.’ Wanting to get it ‘perfect’ often leads to not getting it done at all… or to long hours, paralysis by analysis and missed deadlines. It’s the opposite approach to those who rush to just get something done and out of the way. Yet now I’m advocating for better balance, which can mean to just ‘FIRE’ in order to get going!

My online search led me to a blog on a fitness website that explains this really well. I know nothing about his program or the author, Keith Lai, but I loved his approach. He talks about this concept as it applies to fitness, but I see how it affects every aspect of life where we postpone taking action because we are too caught up in researching/thinking about exactly what action to take, or because we think we need to know the exact outcome of our actions. And as much as we may fantasize about it being otherwise, we can only control our actions, not the outcome.

So here’s a slightly edited version of what Keith Lai had to say – www.fitmole.org/ready-fire-aim

How to Use The “Ready, Fire, Aim” Technique to Crush Any Goal

One of the best books I’ve read recently is called Ready, Fire, Aim by Michael Masterson. It’s more of a business book on how to grow a wildly successful business than anything else (it really has nothing to do with fitness), but the lessons taught are applicable to anyone with ambitious goals, including those who want to transform their physique.

The premise of the book revolves around a concept called “Ready, Fire, Aim” which basically states: Anytime you want to reach a goal quickly, you simply need to act first, then make any necessary adjustments and correct for any mistakes later.

Let’s break it down into the 3 separate stages:

This is the research phase where you begin researching the ins and outs of what’s necessary to reach your goal. In fitness, it might mean reading up on what’s needed for your workout or diet.

If you bought a fitness course (like my Superhero Shredding course), the “Ready” phrase means going through the course and absorbing the information.

But the secret to being successful in the “Ready” phase is to not obsess about understanding things 100%. I’ll go into more detail on Stage 1 later in this article.

This is where you charge straight in and take immediate action (“Fire”). Even if you don’t fully understand the nitty gritty technical details of the workout or diet plan you’re on… JUST DO IT.

Inaction and doing nothing are the worst possible things in the world – there will never be a better time than now so pull the trigger ASAP.

Now that you’ve taken action, you can gradually fix any mistakes you’ve made in the beginning, but because you’ve already taken action, making micro-adjustments will be easy.

Maybe you screwed up the first 2 weeks and just realized you weren’t getting enough protein, that’s fine, you can make that change now. You’re already light years ahead of the guy who’s still reading the diet manual, so pat yourself on the back.

Getting stuck in the “Ready” phase – The #1 reason for failure

Most guys are stuck in the “Ready” phase. They spend too much time researching and not enough time doing. Why? Because it’s a lot easier to read about eating healthy than it is to actually eat healthy.

But in reality, the only reason I kept reading was because I wanted to avoid putting in the hard work. Reading is a lot easier than doing as I’m sure you’ll agree.

Trust me, you know enough. There’s no secret sauce. I need to make a statement – YOU KNOW ENOUGH.

The basic premise of losing fat and building muscle is VERY VERY simple. And yet, people always want to complicate this shit. For some reason they want it to be complicated. Why?

Hell if I know, but if I had to guess it’s because making something more difficult rationalizes their decision to continue “researching” and stay in the “Ready” phase.

More and more people these days are getting caught up in the “science” of fitness (e.g. the best scientifically proven upper chest exercise for hypertrophy), but spending all day going through exercise research reports doesn’t do shit for you. Don’t know what hypertrophy means? Awesome, you don’t need to know.

This why a lot of the gym “bros” who seem a lot less educated, statistically, have superior physiques to the guys who just read and read and read. It’s because they just take action without overanalyzing everything. You have to admit that it’s pretty funny when the people who get the greatest results are the ones who don’t much care about all the science and theory behind fitness.

But what if “it” doesn’t work?

Last December I had a reader email me. To keep the reader anonymous, I’ll be calling him Captain Korea from this point on. Like a lot of my readers, he asked what’s the best workout to lose weight. I pointed him to one of the free workouts on my site and told him to do that.

One day later, Captain Korea emailed me back saying “This looks good, but can I add in 2 extra sets of side lateral raises? I feel like it will work better.”

The workout I gave him was a simple yet very effective 3-day split. Yet in Captain Korea’s mind, he was trying to make what was a great workout plan much more complicated than it needed to be.

Adding an extra couple of sets wouldn’t have killed him, but it’s the fact that he thought about it before even doing the workout once is what drives me insane. If Captain Korea decided to add the 2 extra sets of lateral raises after doing the workout for 4-6 weeks and decided that his shoulders were lagging a bit, then that’s totally fine.

Because by then, Captain Korea has already passed Stage 1 (Ready) and Stage 2 (Fire). Adding in the extra lateral raises is the intelligent Stage 3 (Aim) move.

“READY, AIM, FIRE” – The most common path to mediocrity

The majority of guys follow a “Ready, Aim, Fire” approach to fitness and life.

As you can see, this approach to fitness, and to pretty much anything in life, almost always leads to disaster and at best, mediocre short-term results.

But once you “Fire” before “Aim,” you’ll discover that your entire life changes, and achieving any goal becomes a piece of cake.

How do you approach your goals? Do you follow the Ready-Aim-Fire or the Ready-Fire-Aim model?

Keith Lai talks about the Ready-Fire-Aim model as it applies to diet and fitness (BTW, sound familiar?) but it applies to so many aspects of our lives. I remember working with a web designer on my first website. I got so caught up in obsessing over what colors to highlight that I gave up on working with the designer, created my own ‘temporary’ two-page site and only got back on track five years later! How many possible clients did I lose because I didn’t give enough info on my laundry-list of a two-page site? Compare that to how many would have been turned off if my color scheme (easily remedied later) wasn’t fully expressive of my personality?

Sometimes, the best course is to reasonably prepare (get READY), then jump in and act (FIRE), knowing you can fine-tune the adjustments later (AIM). Besides, by then you might have a clearer target!

I’d love to hear what you think. Join the conversation by commenting below.