The POWER of POSSIBILITY! 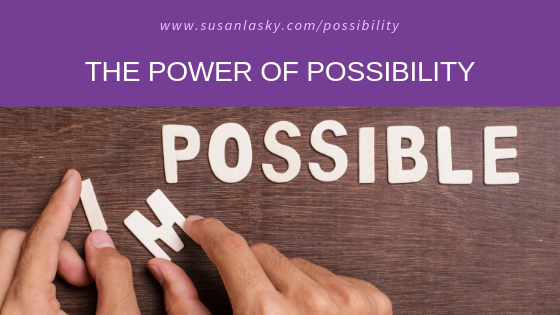 Sometimes it is more difficult to believe in the power of possibility than at other times. So, when we have reminders, hold onto them!

What am I talking about? In my 7-Step PowerPlan to Success™ (you can download the free ebook here), the first Step is Self-Awareness – knowing who you are, and aren’t… what you’re likely to do, and what you probably won’t… what you like, and what you don’t.  It’s about accepting your reality, and so Step #2 is Self-Acceptance. This isn’t about giving in or giving up, but about starting from where you are, not where you (or others) wish you were. New studies are showing that Self-Acceptance is fundamental to both happiness and, perhaps surprisingly, productivity. Making better choices that suit you, and planning realistically, helps minimize overwhelm, which then makes it easier to get things done.

Knowing… and accepting… yourself doesn’t mean you can’t change or improve. That’s why Step #3 is Belief in Possibility – that you always have a choice in the matter. You can’t always control a situation, but how you choose to react can change your life (and often the lives of others, as have those people who began movements or charities after being affected by negative events in their personal lives).

But I’m writing this to talk about the inner power we have that is sooo easy to overlook. Sometimes we’re reminded, and that helps. Today I had an old post of mine pop up on Facebook. It was about an event that happened three years ago, and I’m thankful for the reminder that I have the inner power to do things that I may not intellectually or emotionally believe possible.

I was at an energy workshop. The presenter was Dr. Gene Ang, a Yale-trained neurobiologist. He spoke about the power we have to heal, ourselves and others. To prove that our minds (and spirit) can do things that science would scoff at, we were all given heavy-weight metal utensils (forks and spoons). He walked us through an exercise that ended with being able to bend these thick and solid utensils with thought and energy, not strength. Of course we tried to bend them in every way (including using double fisted grip strength) before the exercise, with no success (ok, no WWE members in the group).

Then we did the energy exercise, and those spoons started bending – I mean really bending. It wasn’t our physical strength that did it, but our focus and will, channeling stronger forces as we loosely held these store-bought utensils by their handles. I admit – I was totally frustrated, being one of the last non-benders in the room. I let out a healthy expletive, directed towards my recalcitrant spoon, and let go of trying. The spoon immediately ‘softened’ in my hand and bent totally in half (see the picture – it’s a cell photo of my handiwork). Wow!

So when you’re running low on positive possibility, remember the spoons – change is within you! Apparently, the Universe wants us to succeed, when we’re really clear about what we want, and willing to put in targeted effort.

I especially like this spoon story at this time of year, bringing the focus from shopping and stress back to miracles and possibility.

Wishing you a wonderful Holiday Season!